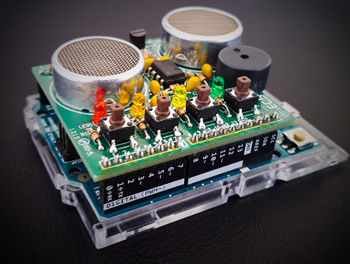 The MUzECS hardware: A custom shield which fits an Arduino Leonardo or Uno.

MUzECS is a platform that engages high school students to learn how to program through a block based programming language and music. Students are presented with a microcontroller unit that houses an ultrasonic distance sensor, four buttons, LED lights, and a speaker. This allows students to program a mini-piano, a theremin, their own autonomous songs, and many other things. Students achieve this by using a custom block-based programming language. The MUzECS software has three distinct versions, one that runs locally on all major platforms, another version that runs on a remote server through a Chrome App, and a Chrome App version that runs locally. The last version is currently in progress. 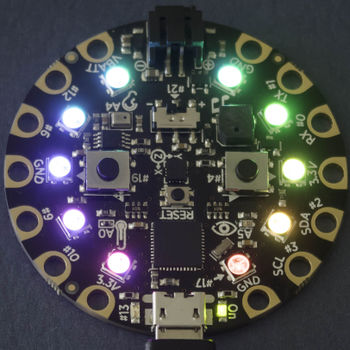 Our requirements to fulfill this research are to:

Getting MUzECS to Install Firmata to Circuit Playground

Firmata is a program that allows you to manipulate all of the peripherals of the board through serial communication. That is, once Firmata is installed on the Circuit Playground board, we can make it turn on LEDs, use its sensors, etc. by just sending serial commands to the board. Having Firmata installed on the board is required for the MUzECS software to communicate with said board. Therefore, our first step is to make the MUzECS software install Firmata into the Circuit Playground board.

Our last step is to add blocks for each of the Circuit Playground's peripherals. For instance, we need to add a new block for the multicolor LEDs, remove the blocks for the MUzECS board's ultrasonic sensor, etc. This can be difficult, not only because the Circuit Playground is very different from the existing MUzECS board, but also because the blocks need to represent the existing Arduino C code. Meanwhile, the libraries we're using for the Circuit Playground use event based Javascript code. Making Javascript code look like C code in such a way that students can easily understand it can be challenging.

Since the start of the summer, many potential research questions and things worth looking into have popped up. For future reference to ourselves and anyone who is interested in working on MUzECS, here they are:

There is a new version of the Circuit Playground board. This one has an ARM processor and works very differently from the previous iteration. We are mainly interested in this board because it uses Microsoft's Makecode. Makecode is an editor based on blockly that works offline. We suspect that it works on Chromebooks because the Circuit Playground express is recognized by computers as an ordinary drive. Potential questions are:

micro:bit is a small board that was featured in the last "Blocks and Beyond" conference. Like the Circuit Playground express, it also has an ARM processor and Microsoft Makecode support. However, micro:bit has several other editors that support it. There is an interactive text based editor that leads the student through the coding, a Python editor, and a Javascript editor that has integrated tutorials. Furthermore, it is also cheaper than the Circuit Playground Express and it has 11 lessons to accompany the board. These lessons have a 5 minute lesson plan and notes for teachers. Needless to say, many of the research questions that apply to the Circuit Playground Express apply to this board as well.

Most of the development concerning the MUzECS platform has focused on adding, improving, and fixing features. Therefore, the block-based interface itself hasn't received much attention in terms of design. The design of the dialect has either been based on intuition, or other existing block-based interfaces. This leads us to the question: How can the MUzECS dialect be improved on the basis of learnability? Can the dialect be improved using empirical data?

The end goals of this project would consist in the following:

The code generated by the MUzECS software is in Javascript. The code is very complex and does not closely resemble the code that is generated by the blocks, as it has promises, events, async functions, etc. Needless to say, the generated code is not a good introduction to students who want to transition to text based programming. Furthermore, the design of the blocks-based language is based on the Arduino language, not Javascript. How do we display text-based code that students can understand?

An idea would be to generate Arduino code and display it to the students. Meanwhile, the Javascript code could be hidden and run on the background. Other blocks-based environments, like Makecode and Applab, do something similar. They only display the code that is completely necessary for students to understand, and hide the rest.