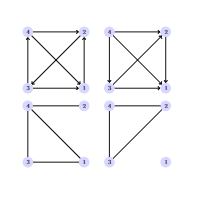 Joel E. Cohen, in 1968, began modeling ecosystems with competition graphs; consequently, mathematicians began developing his new mathematical object. Informally, competition graphs are collections of dots and lines representing some "competitive" relationship between two species, players, companies, etc. Formally, if we let "let D be a directed graph having no multiple edges, the competition graph of D is an undirected graph G on the same node set as D and having an undirected edge {ui, vj} if and only if there exists a third node uk such that {vi, vk} and {vj, uk} are directed edges in the edge set of D "(Dutton et al). Competition graphs, when applied to ecosystems, illuminate previously mysterious properties regarding a community through portraying relationships between species. The relationships they portray help identify primary and secondary extinctions between species, when exploring them.

This project has two main goals: expanding the theory for (i,j)-step graphs and exploring their applications. For expanding their theory, this project may explore generalizations, applications to various families of graphs, or explorations with hypergraphs. Concerning their applications, this project may examine and implement various (1,2)-step competition graphs directed towards explaining various relations between species, explaining primary and secondary extinctions, or explaining potential for extinctions within various communities. Throughout the summer, the researchers will take this project in the directions they see fit.

During this project, we will examine and explore the following:

Additionally, we will further previous research by doing the following:

A brief overview of our goals for this 10 week process are listed below. For a complete list of our goals, click here.

Each researcher keeps a log of the entire process, including reflections at the end of the week. These logs demonstrate the researcher's actual progress on their respective projects. Specifically, this determines whether or not they are actually reaching their milestones and completing their goals. If you would like to read them, click the researcher's name: Carissa Babcock or Max Black.